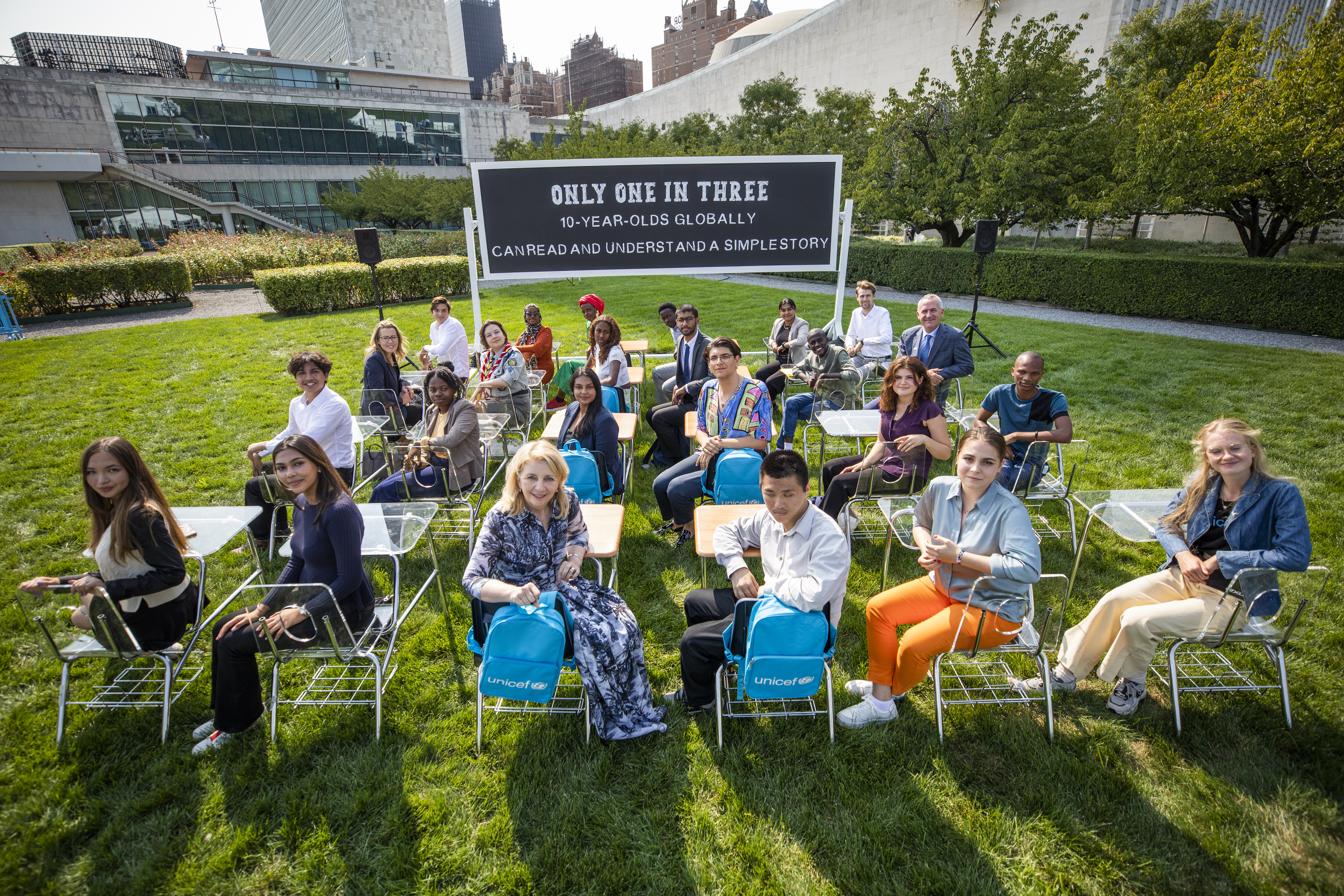 UNICEF Youth advocates from around the world gathered in New York to participate in the first ever Youth Advocates Mobilization Lab organized during the 77th session of the United Nations General Assembly.

The 34 UNICEF Youth Advocates who are all changemakers in their communities represented 25 countries: Adama from Senegal; Dominique and Alex from Romania; Ashley from Barbados; Ayaan, Kyle and Salma from the United States; Zaakat and Chisomo from Malawi; Elias and Josefine from Sweden; Engel and Olivina from Indonesia; Emmanuel from Tanzania; Farzana from Bangladesh; Julia from Poland; Makhtom from Sudan; Maria from Bulgaria; Mujtaba from Iraq; Penelope from Norway; Priyanka from Trinidad and Tobago; Tom, Raina and Sakiye from Germany; Reeana from Canada, Ree-Ana from Jamaica; Ruairí from Ireland; Saeed from the United Arab Emirates; Giang from Viet Nam, Vanessa from Luxembourg, Chen from China, Mungnzul from Mongolia, Paula from Ecuador, and Global UNICEF Youth Advocate Gitanjali.

During five days, they shared experiences, reflected on their advocacy journeys and learned skills and tools to continue their fight for children’s and young people’s rights.

With the Mobilization Lab  taking place during the United Nations General Assembly, youth advocates had the opportunity to connect with global decision makers and leaders on the issues they are advocating for – education, mental health, gender equality, youth participation and climate action.

UNICEF Youth Advocates engaged in dialogue about youth-led advocacy with UNICEF Executive Director, Catherine Russell, where they had the chance to share their experiences, ask questions and raise the problems affecting youth in their communities.

They also met with UNICEF Deputy Executive Director Karin Hulshof as well as UNICEF teams working on climate and mental health to express the importance of involving youth in their programs.

A group of mental health advocates  met with Her Majesty Queen Letizia of Spain to discuss mental health challenges young people are experiencing in their communities and their advocacy to break the stigma and promote mental health and well-being.

The youth advocates also participated in the Transforming Education Summit convened in response to a global crisis in education at the United Nations Headquarters. Maria, Inclusive Education Advocate for UNICEF Bulgaria, spoke on a panel with the UN Secretary General, highlighting that if we want to transform education, we need to pay close attention to the needs of girls and children with disabilities. "Today I stand before you as a proud university student thanks to the support of my family. But my case needs to be the norm and not the outlier. Every child with a disability should have the opportunity to reach their full potential," said Maria.

“It's really important for youth to be included not only because we are the future, which we often hear about, but because us, young people, we are here right now and we deserve equal voices and equal say as anybody else. We are people just the same way adults are. And that means we all deserve an equal right to participate,” said Elias from Sweden.

During the Youth Advocates Mobilization Lab, the Youth Advocates engaged in networking, sharing experiences, reflecting on youth advocacy, and skills-building at the UNICEF headquarters. They got to reflect on their role as youth advocates and the future of their collaboration with UNICEF; they exchanged thoughts on how to care for their mental health as young advocates, and participated in media training from the UNICEF team. They also took part in a Mediathon session to brainstorm digital contents to promote their advocacy and share their experiences from the Mobilization Lab.

“It was an amazing and memorable experience. One thing I learned is that the change is happening, we see the youth engagement, and it’s really inspiring. It's really good that we have heard from the leaders and that they are also willing to support us, so it’s also a sign for us to keep up our efforts and keep on advocating for what really matters in our communities,” said Emmanuel from Tanzania. 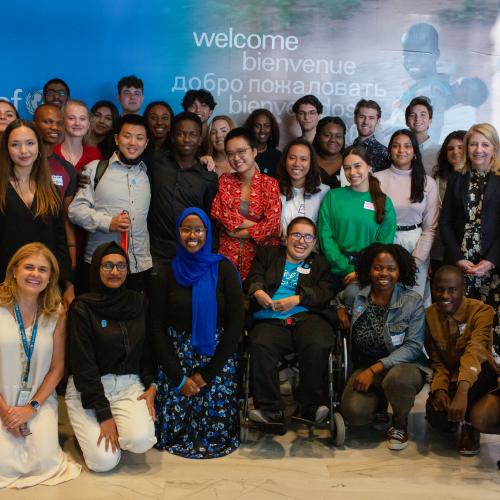 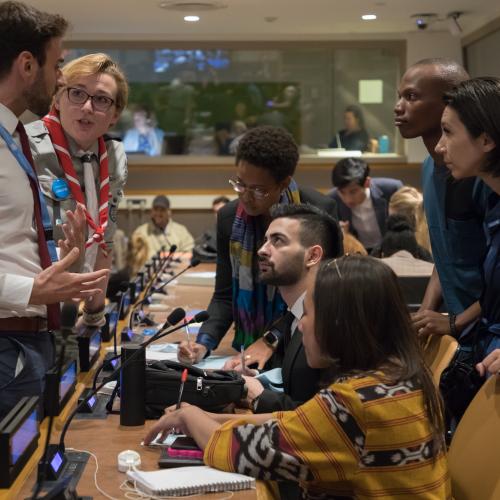 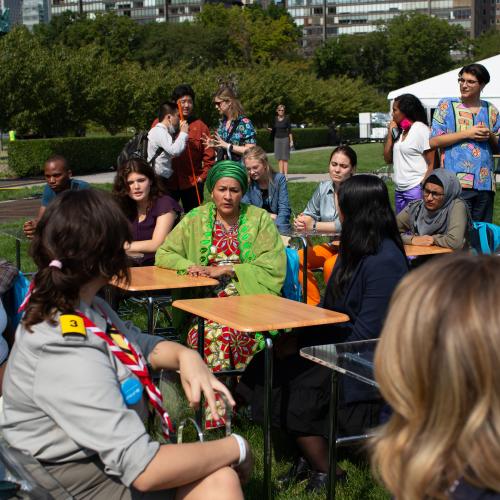 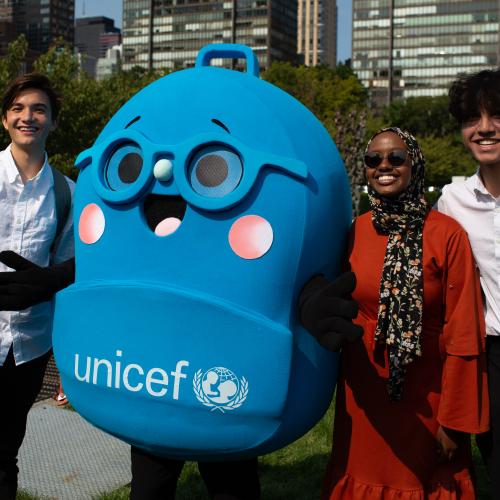 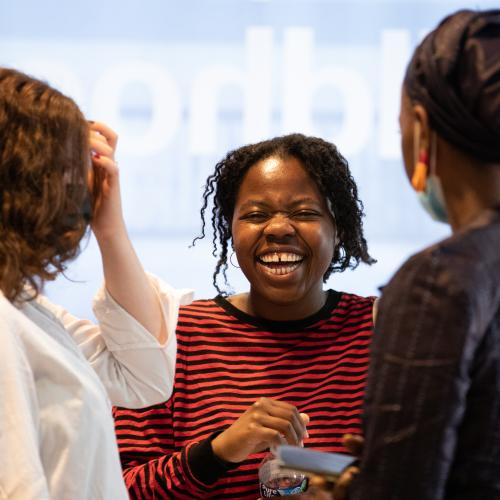 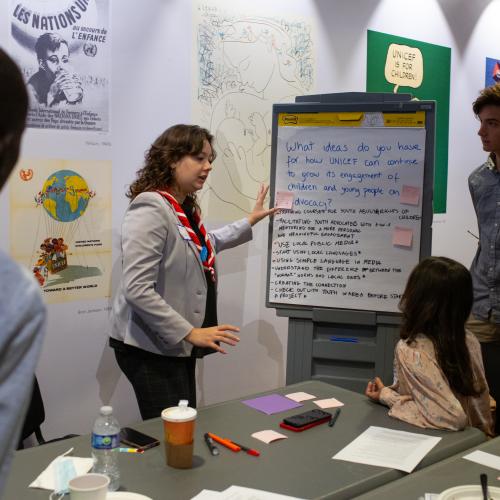 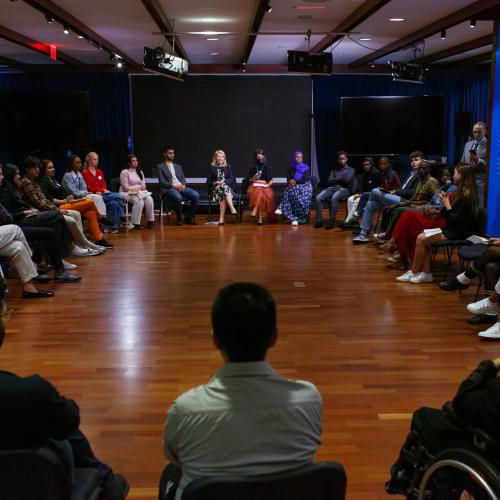 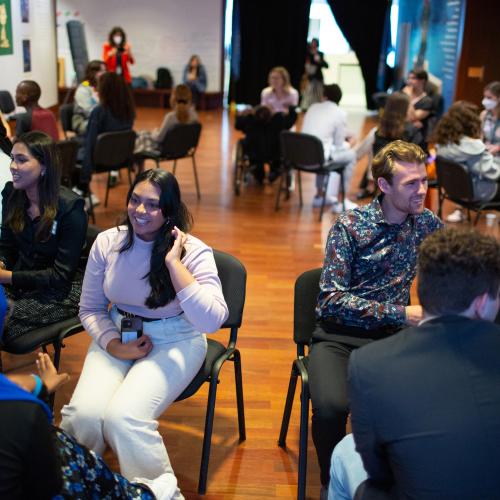 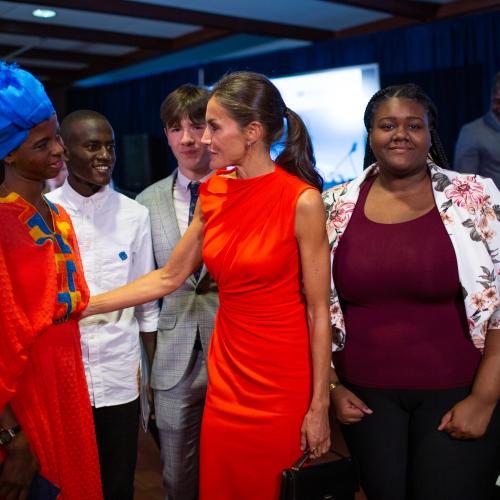 Image Credit
Tanya Bindra
Queen Letizia Ortiz Rocasolano of Spain (centre) meets with UNICEF Youth Advocates at an event convened at UNICEF Headquarters in New York, on the theme of mental health and schools, under the title ‘Promoting and protecting learners’.
Image 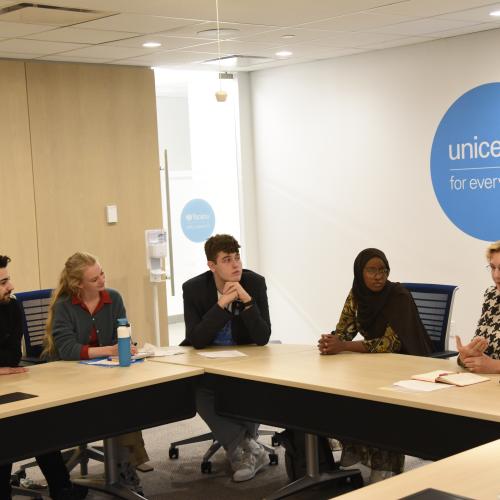 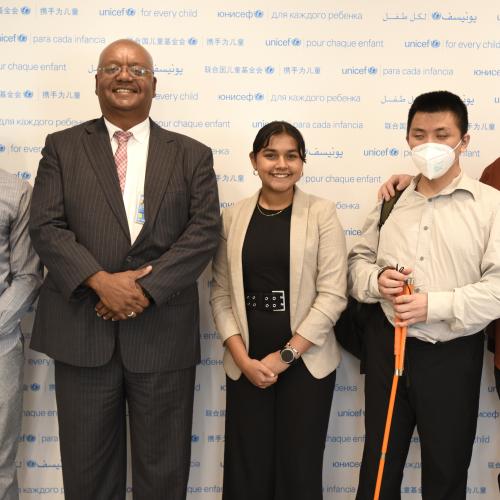 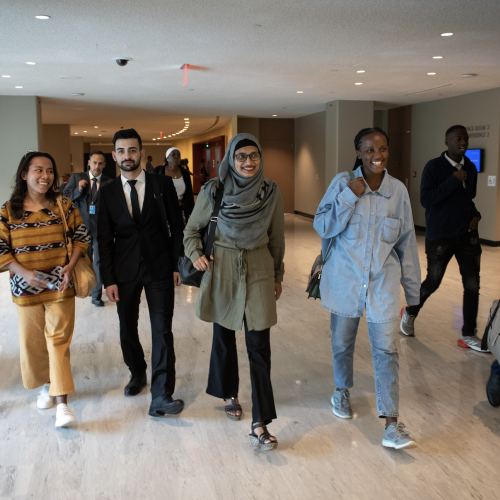 In their own words:

“In this world it's really difficult for young people to be taken seriously. When you have multiple voices together, our voices are louder.” Ruairí, 17, Ireland.
“Why would you not invite youth to the table, and why wouldn’t you want youth to take part in decisions and to make their own decisions, specially because it’s affecting their future –our future – and we should be the ones making decisions.” – Sakiye, Germany
“We are here, we are coming, we are saying what we want and we are also trying to make change happen.” – Engel, Indonesia
“We are all so different, we all have different backgrounds and different opinions and views, that we can contribute to create a diverse future. It just makes much more sense to have young people’s inputs.” – Tom, Germany